Dependency parsing is the task of determining syntactic dependencies between words in a sentence. The dependencies include, for example, the information about the relationship between a predicate and its arguments, or between a word and its modifiers. Dependency parsing can be applied in many tasks of natural language processing such as information extraction, coreference resolution, question-answering, semantic parsing etc.

Many shared-tasks on dependency parsing have been organized since 2006 by CoNLL (The SIGNLL Conference on Computational Natural Language Learning - https://www.conll.org/), not only for English but also for many other languages in a multilingual framework. From 2017, a Vietnamese dependency treebank of 3,000 sentences is included for the CoNLL shared-task “Multilingual Parsing from Raw Text to Universal Dependencies”. However, this available dependency treebank for Vietnamese is still small and its automatic conversion from the UD v1 to UD v2 contains several errors.

A training corpus of approximately 10,000 dependency-annotated sentences will be given to participants one month before the test phase. For the test, participant systems will have to parse raw texts where no linguistic information (word segmentation, POS tags) is available.

The set of dependency relations is defined according to the universal dependencies (cf. UD v2 at https://universaldependencies.org/u/dep/index.html). A guideline of Vietnamese dependency annotation will be published for reference.

The dependency-annotated data must be encoded in CoNLL-U format (please refer to https://universaldependencies.org/format.html for a detailed description) as below.

Annotations are encoded in plain text files (UTF-8, normalized to NFC, using only the LF character as line break, including an LF character at the end of file) with three types of lines:

Sentences consist of one or more word lines, and word lines contain the following fields:

Participants will be provided with a Vietnamese dependency treebank containing about 10,000 sentences. Gold standard word segmentation and part-of-speech (POS) tags are available in the training set.

The test data will be given in raw text. Participant systems should return the dependency parsing result of the test data in CoNLL-U format.

Participant system is evaluated using the LAS (Labeled Attachment Score) by comparing the gold relations of the test set and relations returned by the system. The LAS is given as follows: 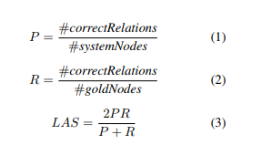 We use the evaluation script published at the CoNLL 2018 (https://universaldependencies.org/conll18/conll18_ud_eval.py).